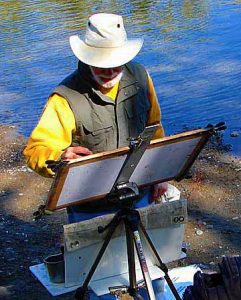 A recognized artist, has a close relation-ship with watercolor painting for over sixty years. Early in his adult career he is the recipient of numerous awards; including his state’s Watercolor Gold Medal in 1974r, and the Bank of America watercolor award at the DeYoung Museum, San Francisco.

He has taught watercolor classes and workshops, juried art exhibitions and demonstrated his watercolor technique for many organizations. His work is in private and corporate collections nationally and internationally.

Hansen combines outdoor work, with the more controlled studio environment . Over the years his subject matter is varied. However, raised in the city of Mount Shasta, and now living within walking distance of Sacramento’s American River Parkway, Hansen prefers the outdoors; even much of his non-objective work originates, whenever possible among rocks, trees, sand, and water.

His formal education includes the University of California,Berkley, and at the University of California College of Environmental Design (Architecture), Berkeley, and the California College of Arts and Crafts (CCA), Oakland, where he studied watercolor painting with George Post, and Louis Miljarak. Hansen is indebted to his mentors, and has benefitted from the friendship and workshops of other professional artists including Patrick Gallagher, Richard Yip, Jade Fon Woo, Henry Fukuhara, Frank Webb, Barbara  Niches, and Tony Couch.

At thirteen years of age, Woody’s professional art career began with painting cartoons on the windows of local businesses. By the time he reaches high school, he develops a commercial sign business. Concurrently, he initiates a broadcasting career at local radio station, KWSD, as a weekend announcer/disc jockey and the host of a Pepsi Cola Top Ten show.

After college he becomes employed at KKIS radio in Pittsburg, California, as a radio personality. He eventually becomes the station’s Program Director until being drafted into the Army. Following basic training at Fort Ord, California, he is  assigned to Fort Lewis, Washington. During his Fort Lewis assignment,  and at the request of the company commander, he successfully completes a variety of art projects for the United States Army.

While at Fort Lewis he also serves as a broadcaster for the Fort Lewis Public Information Office.

During off duty hours, he lands employment at  nearby KMO Radio, Tacoma, as an evening disc jockey until finishing his military service with a thirteen month tour of duty at Camp Humphrys, South Korea.

Soon after discharge from the army, Hansen finds work as a radio personality  at KSRO broadcasting, in art friendly Santa Rosa, California, where he eventually becomes the station’s Program Director. Five years later he accepts a position as Program Manager with NBC/ABC affiliate KCRA  Radio and Television, in Sacramento. All this time, his interest and practice of art never wains. Around 1972, he decides to leave broadcasting for a full-time art career.”